You will only see if you get it

All meeting rooms at the Be Informed headquarters are named after famous philosophers. Large posters explain how they relate to our product and company. The second philosopher I came across is Ludwig Wittgenstein. His quote:“Logic takes case of itself; all we have to do is to look and see how it does it.”

The poster reads: “At Be Informed, our approach is more logical. We look at the goal of the process and then simply and logically work our way back to what is needed to successfully complete transactions towards that goal.”

Like every sports-minded Dutchman, the combination of the wordslogic andgoal made me think of the most famous Dutch footballer: Johan Cruijff. He is not just dazzled defenders with his football skills; his pseudo philosophical comments and weird twists of old saying had the same effect on people. Completely unaware of this, Cruijff ends every cryptic sentence with: “…it’s logical.”

In 1983, Cruijff joined long-term rival Feyenoord. During the first training session they played a 4-2 rondo on a small square pitch (see figure 1). Black has possession of the ball and the two in the middle (orange) have to conquer it. An easy game, played in during training sessions everywhere. 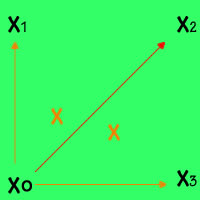 The Master immediately said: “Stop! You do it all wrong.” The other players replied: “But we play this game for years and it works fine. What’s the problem?” Cruijff explained that when the 4 players are in the corners, they limit their space. There are just two good passes possible (the orange arrows), as the pass through the middle is likely to be intercepted. There is hardly room for improvement, for example when X1 and X3 move will not change a thing.

So the others asked: “Well, this might be, but how to play it right?” Cruijff said: you need to stand halfway along the sides (see figure 2). Then, when moving, X1, X2 and X3 will create space and give the player with the ball more options. 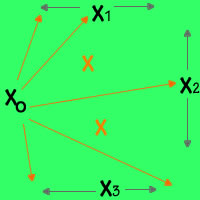 Even the pass through the middle will be OK because the defenders will be forced to leave this space more open.

At first, the others of the Feyenoord squad were sceptical. But they tried it and it worked really well. They understood and adapted the new playing style. So by simply turning the players’ square 45 degrees and introducing a new vision, a whole new game was created. Cruijff did not change the rules, he gave the players a new perspective. To use an other famous Cruyff quote “You will only see if you get it” (Je gaat het pas zien als je het doorhebt). This is actually the title of a management book on Cruijff and leadership.

And there is a link with our company as well. At Be Informed, we looked at the way business processes were automated and we said: “Wait, is this really the best way to do things?”. Instead of playing the same game over and over again, we introduced a new goal-oriented approach and created a completely new -and winning- game in the world of Business Process Management.